Greg and Sue Nussey were both born and raised in the Comber area. With their families’ roots in Comber they have continued living here. This year marks their 35th wedding anniversary. They have three children (Mike, Trisha and Katie) and two grandsons (Zayne and Logan). 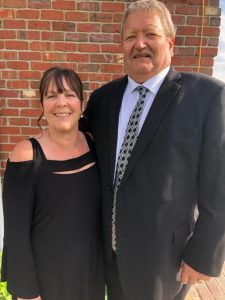 They first became involved in the Comber Fair while their children were in school. Sue initially worked the gates and worked at the canteen at the Demolition Derby. She also helped with the Photo Contest. Greg helped with the set up on the Thursdays of the Fair week. He also became the runner for the gates during the Fair. As well, for about 10 years Greg and Sue worked alongside other Fair volunteers in the Beer Tent which included set up and take down. Greg happily helped set up the 4H barn for the animals.

Greg and Sue’s spirit of community involvement became contagious as Sue’s sisters and brothers also volunteered to help them with their activities. Their children started to volunteer their time when they were in high school fulfilling their community hours requirement for graduation. After high school when they were old enough they helped with the gate entrance of the Beer Tent. They knew the ages of those entering and, if needed, Greg became the “bouncer”.

Some of their most memorable moments include “last call” in the Beer Tent. Sue recalls when her daughter, Trisha, was a baby got hit on the head with a candy while watching the parade. Greg remembers watching a hypnotist hypnotize people and make them do things they didn’t want to do. One example was a woman who when asked what she thought of the fair couldn’t stop saying, “It’s a darn nice fair” until she stepped off the fairgrounds.

Their advice to others thinking of volunteering is to have a lot of patience. They believe it is good for your community to get involved and especially to keep the Comber Fair tradition alive. They missed it when an in person fair wasn’t possible. They have been happy to be a part of it for all these years.

Greg and Sue feel the Comber Fair is a place where they see friends they haven’t seen in a while. They also enjoy seeing up to three or even four generations of the same family strolling through the fairgrounds. It is a family and community event that will only continue with many volunteers.

Greg and Sue are very honoured to have their efforts recognized by the Comber Agricultural Society.