Bob Hornick was born and raised in Comber. As a youngster he enjoyed attending the Comber Fair. By 1969 he became a member of the Fair Board and has been on and off the Board ever since. He was elected President in 1973 and again in 1984. 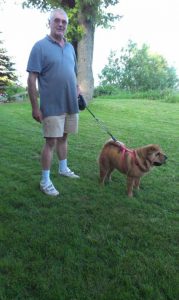 After the Fair celebrated its 150th anniversary in 2009 there were rumors that it was closing down. Bob took over as President for the third time to make sure that it did not falter. It was just too important to him to let an annual Heritage/Historic event like the Comber Fair come to an end. He said at the time he was very fortunate to work with a fantastic board that shared his sentiments about the Fair. During Covid Bob took on the task once again of being President in order to continue the Fair’s presence in the community when an in person fair was not possible.

As President he supported and sat on each committee while coordinating activities and helping anybody who was struggling with completion of their obligations. His style was not to dictate what each committee was suppose to do but rather let them do their job and report the results at a Board meeting. Bob always said to incoming Presidents, “You have two choices. Support your committees to the fullest or do it yourself.”

He was President for the first Demolition Derby that continues to be a proven success each year. He also was President when the executive decided to buy portable fencing to enclose the fairground during the fair weekend. With another board member he traveled to Toronto to purchase used bleachers from the CNE. He was President when the Comber Fair received the Trillium Grant for a cement floor in the 4-H barn.

Over the last 50+ years Bob has many good memories. One of the most memorable events was when the Comber Fair had the Heavy Horses from Ottawa come to put on a spectacular performance for the fair goers.

To Bob the Comber Fair is a family oriented event to make lifetime memories. Bob recalls how some volunteers would book off fair week from work in order to assist. He remembers that some farmers would put things on hold to make it to the fair. According to Bob this is why people come back regardless of distance to have their family reunion during the fair weekend.

The Comber Fair Board is very honour to recognize Bob for his tireless contribution to the Comber Fair, both as a member and as President multiple times, helping to organize a Fair that has always been very important to him.