THE MEMBERS OF THE COMBER AGRICULTURAL SOCIETY CAFÉ 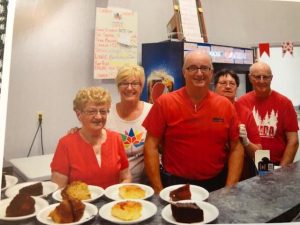 The origin of the idea for the café came from the Ag Society Board of Directors in 1994 with the construction of a new community centre. They realized at that time the potential of having an air-conditioned area where fair patrons could visit on a hot day and enjoy home-made lunches.

Scott Rowsom, a fair director, along with her daughter, Bet Pearson, directors Jodee, Linda and Vicki and friends from St Andrew’s United Church were the original staff of the first café. The early café was intended to have a tea room feel with coffee, tea, pies and sandwiches on the menu. The café area quickly became a place were friends would meet amongst beautiful floral entries to relax for a few minutes or a few hours before continuing to enjoy the fair.

The Café became a “must stop” for many fair goers year after year and Bet and her helpers, BL and Bruce, Millie, Donna, Patty, Bill, along with many other friends and grade and high school students enjoyed seeing new and repeat customers as well as old friends from the past. It seemed as if most people who visited the fair would eventually pass through the café area. 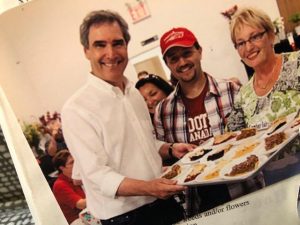 One of our favorite repeat customers was Mayor Tom Bain, who faithfully supported the café many times each fair weekend for many years. He knew there would always be a piece of rhubarb pie waiting for him. The many members of Lakeshore Council were always very generous with the café.

Perhaps the most notable customers that visited the fair and the café was a young Justin Trudeau who was travelling with Michael Ignatieff on his tour bus as Ignatieff made a bid to be Prime Minister of Canada.

Bet had a big chat with each of them. Mr. Ignatieff bought many slices of pie for his bus staff to enjoy which made it onto his web page with very complimentary remarks. Rhubarb was his favorite. That was a very exciting day.

The President of the Leamington Agricultural Society introduced Ken Dryden to the Comber Fair and then they made a stop at the café. Always fun to meet a celebrity. 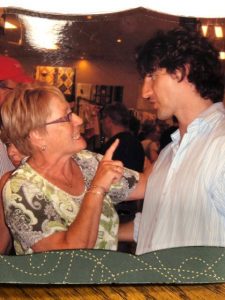 Excitement was always nearby it seemed, and more than once Bet had to change from running a food outlet to running a first aid station. Even one time she had to ride in an ambulance with a crisis infant patient to Leamington Hospital ER. Once a nurse, always a nurse.

Bet enjoyed when residents of retirement and nursing homes made their yearly stops at the café and she always made sure they enjoyed their choice of treats “on the house”.

The café grew over the years. From a relatively humble beginning to a lunch area that each year saw over 100 pies sliced and sold and 30 loaves of bread made into sandwiches.

Bet had many faithful friends who would bake the 50 pies that she and friend Vicki would make. As the years went by aging friends were no longer able to deliver pies to the café, so Bet would make the rounds early in the morning and collect pies that had been faithfully baked the night before.

In later years exhibitors’ pies also went into a cooler and were enjoyed by the café’s many patrons. An army of faithful bakers also supplied the café with cookies, brownies, tarts and rice krispie squares that sold out year after year.

Because of its visibility the café also became an impromptu information booth and raffle ticket depot. There was seldom a dull moment.

Bet and her many faithful friends enjoyed working for the benefit of the fair board for 26 years in the café and were always proud of the annual fair that the board of directors worked so diligently to offer to the residents of Essex and Kent Counties.

Bet was pleased to see that the many thousands of dollars that the café raised over the years for the fair board was used in such exciting and inventive ways that made the Comber Fair the favorite of so many people who would stop by the café and state their appreciation that a real country fair still existed.

To be a volunteer at the Comber Fair is a labour of love. Many hours of hard work go into creating an event like the fair. Look at our little village while the fair is on, a beehive of activity.

Thank you to the President and Directors of the Comber Agricultural Society for carrying on the tradition of the Comber Fair. You make our community proud.

Bet is pleased that the Agricultural Society chose to recognize the Café Group as an integral part of the Comber Fair experience.